A Revolution Sparks a Journey to Help Tinnitus Patients 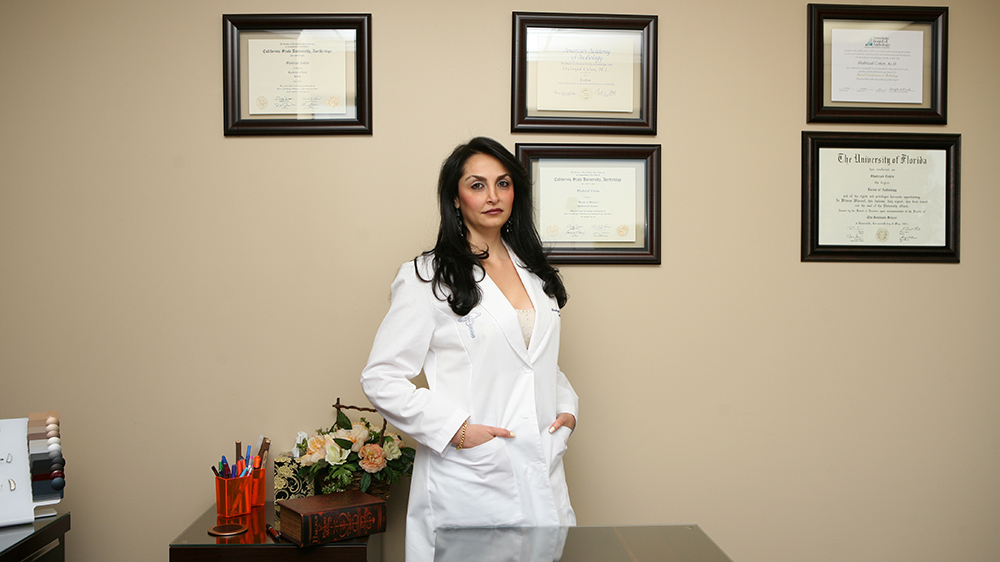 By the time Shahrzad Cohen cut the ribbon and formally opened her audiology clinic in 2013, there was a long trail of dramatic events tracing her path to that moment. Some were planned; many were not. And yet they brought her to the place she feels she should be: Running a clinic that specializes in tinnitus, helping people manage what, at times, seems unmanageable.

Shahrzad was born in 1973 to Jewish parents in Tehran. Her mother was a dental hygienist, her father an architect and prominent figure in the Jewish community. Her grandfather, notably, was a physician to Mohammed Reza Shah, the last Shah of Iran.

As a shy but rambunctious five-year-old, Shahrzad loved listening to Michael Jackson and riding her bike in the family’s large backyard. Other than going to school, she wasn’t allowed to play beyond its walls often as the country was in the throes of a revolution. A revolution that, only one year later, would oust the Shah and set Shahrzad’s journey into motion.

When the Shah was overthrown, many prominent people were jailed or killed without trial. Shahrzad’s father spent nine months in prison, but thankfully survived. In 1988, her grandparents fled Iran to the safety of the United States. Four years later, 19-year-old Shahrzad followed and was granted asylum.

The new immigrant lived with her grandparents in Woodland Hills in the suburbs of LA. She set high goals for herself and attacked her work and studies tenaciously to achieve them. She intended to become a physician and was studying for the entrance exam to medical school when her mother arrived from Iran via Turkey. While awaiting her US Visa in Istanbul, her mother began experiencing a near-constant ringing in her ears that was gradually getting worse. If leaving Iran had set Shahrzad on a new journey, this was its first significant turning point.

Shahrzad and her mother spent most of a year searching for someone who could offer the elder Cohen relief. But the physicians they saw couldn’t help. Eventually, mother and daughter landed in front of an audiologist who specialized in tinnitus and within a few consultations, the relentless sound became manageable. This was the catalyst for Shahrzad moving from medicine to audiology.

ntaz
how to unignore a chat on messenger

By that time, Shahrzad was already accepted into medical school and the deposit had been paid. But Shahrzad explains, “I wanted to be the miracle worker. I chose to forgo med school and study to be an audiologist, instead.”

By 2001 Shahrzad was working for a private practice in Long Beach, California. She stayed there, gaining experience and building a reputation, until she became pregnant with her first child Joshua. A few years later, Joshua welcomed a sister named Jasmine.

“Around 2008 I noticed my son, who was about 4, showing signs of CAPD [central auditory processing disorders].” Joshua easily lost interest when his mom read him stories, he couldn’t follow conversations if there was background noise, and he was struggling in preschool. After five years of researching and learning how to help him — and with a newly earned Au.D. in hand — Shahrzad opened an audiology clinic that specialized in helping kids with CAPD.

Shahrzad’s path now seemed set, but that changed when Shahrzad was again touched by tinnitus — this time even more personally. After attending a wedding celebration in 2016, she began hearing the constant high-pitched buzz of power lines everywhere. She knew immediately that the tinnitus that had been haunting her occasionally was now there to stay. “This brought me back to how and why I started in the field,” she says. “Tinnitus became my mission once again. I searched for ways to manage it and began offering treatments to others. My tinnitus clinic began to flourish.” Today, more than half of the patients passing through Shahrzad’s clinic have tinnitus. She believes her person-centered approach is part of the reason for her success.

“My clinic is a piece of the world, the way I wish it was,” Shahrzad says between patients. “The staff are a close-knit group who help people because that’s what they believe people should do.” The goal of consultations at the clinic isn’t to sell devices, it’s to offer solutions and relief. Sometimes that involves devices, but Shahrzad says, “I have learned that, often, expensive technology is not the solution. Something as simple as a loved one acknowledging how emotionally challenging tinnitus is could bring relief to a tinnitus sufferer.”

Staff at the clinic study Ida’s Tinnitus Communication Guide to learn how to communicate better with tinnitus patients. “This simple guide,” Shahrzad says, “makes them think about the wants and needs of patients and how tinnitus could affect the lives of not only the patient, but also their family and co-workers.”

Shahrzad often uses the Tinnitus Thermometer with her patients as well. The thermometer helps clinicians assess how patients are experiencing and coping with tinnitus. “I use it with patients because it allows a visual aid to their emotions,” Shahrzad says.

Ida tools and person-centered care played important roles when Raechelle, who worked in the Hollywood film industry, came into the office. She was desperate. Her tinnitus felt like it would make her head explode. Shahrzad and Raechelle decided to track Raechelle’s reactions to the tinnitus every day with the Tinnitus Thermometer. Raechelle realized that it wasn’t bad all the time or even every day. Through journaling and the use of the thermometer, Shahrzad helped Raechelle discover what exacerbated the tinnitus. Raechelle didn’t need any devices; she learned how to manage her tinnitus by modifying her environment and her diet.

Tom, a gardener who came to Shahrzad’s sun-lit California clinic, also benefited from her person-centered approach. Tom was working outside of a bank when it was robbed and he was shot in the head as the criminal made his escape. He was left paralyzed, could barely speak, lost some of his hearing, and suffered from debilitating tinnitus. “He was brought to my clinic in a wheelchair,” Shahrzad recalls, “by the psychiatric nurse who also happened to be his sister. Tinnitus was raging day and night.” Since there was so much that Tom couldn’t control about his situation, he welcomed the ability to be part of the decision-making process for his treatment. Together, Tom and Shahrzad developed a strategy that involved hearing aids to remedy the hearing loss and a neuromodulation tinnitus therapy system to address the tinnitus. Shahrzad also included Tom’s family in his treatment since they were so involved in his life and care. The former gardener believes he was saved for a reason and is now an outspoken advocate in the traumatic brain injury community for hearing and tinnitus-related issues.

Shahrzad shares, “My golden rule is to be emotionally involved with patients because it makes all the difference in the outcomes.”

Shahrzad’s journey has taken her far from the big backyard In Tehran. And though Shahrzad doesn’t know where her journey will end, she’s determined to continue educating people about tinnitus and providing hope that a better life is within reach for people living with it.

The information provided in this article is not meant to be medical advice and is for educational purposes only. If you would like to learn more about this and other topics related to hearing loss, feel free to contact Hearing Loss Solutions by calling 818-989-9001 or by clicking here.